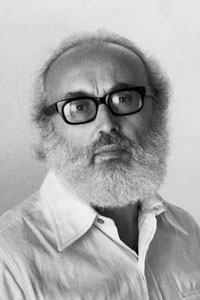 Angelo Mangiarotti was born in Milan on February 26th 1921. He graduated in architecture from the Milan Polytechnic in 1948. From 1953-54 he was visiting professor at the Illinois Institute of Technology’s Institute of Design in Chicago, where he presented a project for the city “loop”. During his stay in the States he met Frank Lloyd Wright, Walter Gropius, Mies van der Rohe and Konrad Wachsmann. Mangiarotti has taught a great deal in foreign universities and has also had many works published in specialized magazines, books and newspapers in Italy and abroad. In 1970 he was visiting professor at the University of Hawaii, in 1975 at the Ecole Polytechnique Fédérale in Lausanne, in 1976 at the University of Adelaide and at the South Australian Institute of Technology in Adelaide. He has also participated in numerous seminars and conferences. His engineering efforts have been rewarded by numerous prizes in the fields of industrial design and building construction, including the 1956 Domus Formica Prize, the 1962 In/Arch Prize, the 1963 National Golfo di La Spezia Prize for Industrial Design, the 1972 AIP Prize (Italian Association of Prefab Manufacturers) for industrial building construction, the 1979 Prix Européen de la Construction Métallique and an honorary medal and diploma in 1986 at the world architecture biennal in Sofia.